When you are planning for SCCM uplift to the build 1906 you must note that starting version 1906 SCCM client requires SHA-2 code signing support. What does that mean for you? It means that if your managed environment still have Windows 6.x OS systems (Windows 7, Windows 2008 and Windows 2008 R2), these systems require SHA-2 code signing support enabled. But do you really need to raise a change request and update legacy systems which are sooner or later will be decommissioned? There is another option. As you know SCCM client has ‘forward’ compatibility with newer infrastructure. That means that even older clients will work with SCCM 1906 but with the limited functionality. Microsoft call that feature ‘Extended Interoperability’ (EI). The following clients are recommended EI clients:

I have selected the version 1902 as EI client for my environment which still contains a number of Windows 2008 R2 systems. To get my EI client in SCCM console I have selected both 1902 and 1906 updates for download. I need 1902 only as a source of EIC. The client binaries can be found in EasySetupPayload\<Configuration Manager 1902 Package GUID>\SMSSETUP\CLIENT. You have to copy all these files to the separate location because after the uplift to version 1906 this location will disappear. Then you have to create a collection for all your Windows 6.x OS systems and exclude this collection from the upgrade: 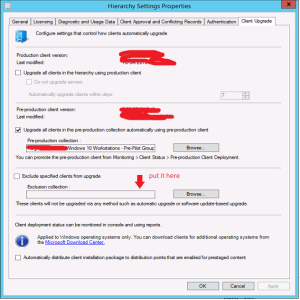 Now you have to upgrade the SCCM client on Windows 6.x systems by any mean. The client ver. 1902 will be capable to perform the main functionalities: software deployments, software updates and hardware inventory. The question is: would you be able to deploy the EI Client using SCCM. The answer is: yes! Package your EI client. Add a one-line cmd file to your package:

Keep in mind that all your legacy systems must be in excluded from the automated client upgrade. /IgnoreSkipUpgrade switch will override this setting. Another important thing to know is that if the client version is older than the infrastructure version, ccmsetup exit code will be 7 instead of 0. However I have noticed that you don’t have to capture this exit code because your SCCM Client will be shut down and reinstalled. Application deployment cycle will detect the presence of the upgraded client during the next poll.